Here is a list of Jonathan's previous books and principal articles. The books are all available from Amazon. 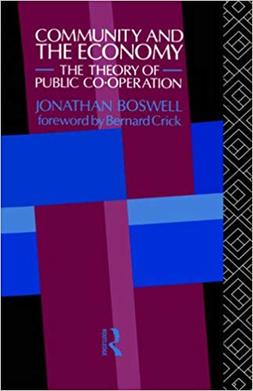 THE RISE AND DECLINE OF SMALL FIRMS, George Allen & Unwin, 1973.  Analysed and compared the economic performance of new and older small firms in several British industries, with implications for public policy.

SOCIAL AND BUSINESS ENTERPRISES: An introduction to organisational economics, Allen and Unwin, 1976.  A primer on basic economic concepts and controversies.

COMMUNITY AND THE ECONOMY, The Theory of Public Co-operation, Routledge, 1990/94.  'Extraordinary ...the most convincing theory of a mixed economy that I've read in my lifetime' (Bernard Crick).  'Pathbreaking analysis of the links between the values of community and the imperatives of an advanced economy' (London Review of Books).  'Suggests a comprehensive framework for a constructive alternative to the tyranny of the market and the tyranny of the state' (Choice).  'Must be read by politicians partly for its ...theory of a sensible mixed economy' (Political Quarterly).  'Seriously challenges the value orientation of most economists' (Review of Political Economy).  'Significant' (Review of Social Economy).  'Boswell's book gives communitarianism a good name' (Robert N. Bellah).

CAPITALISM IN CONTENTION: Business Leaders and Political Economy in Modern Britain (with James Peters), Cambridge University Press 1997. Business ideologies and relationships with government from the 1960s to the 1990s.